Why dark chocolate is so beneficial for your gut 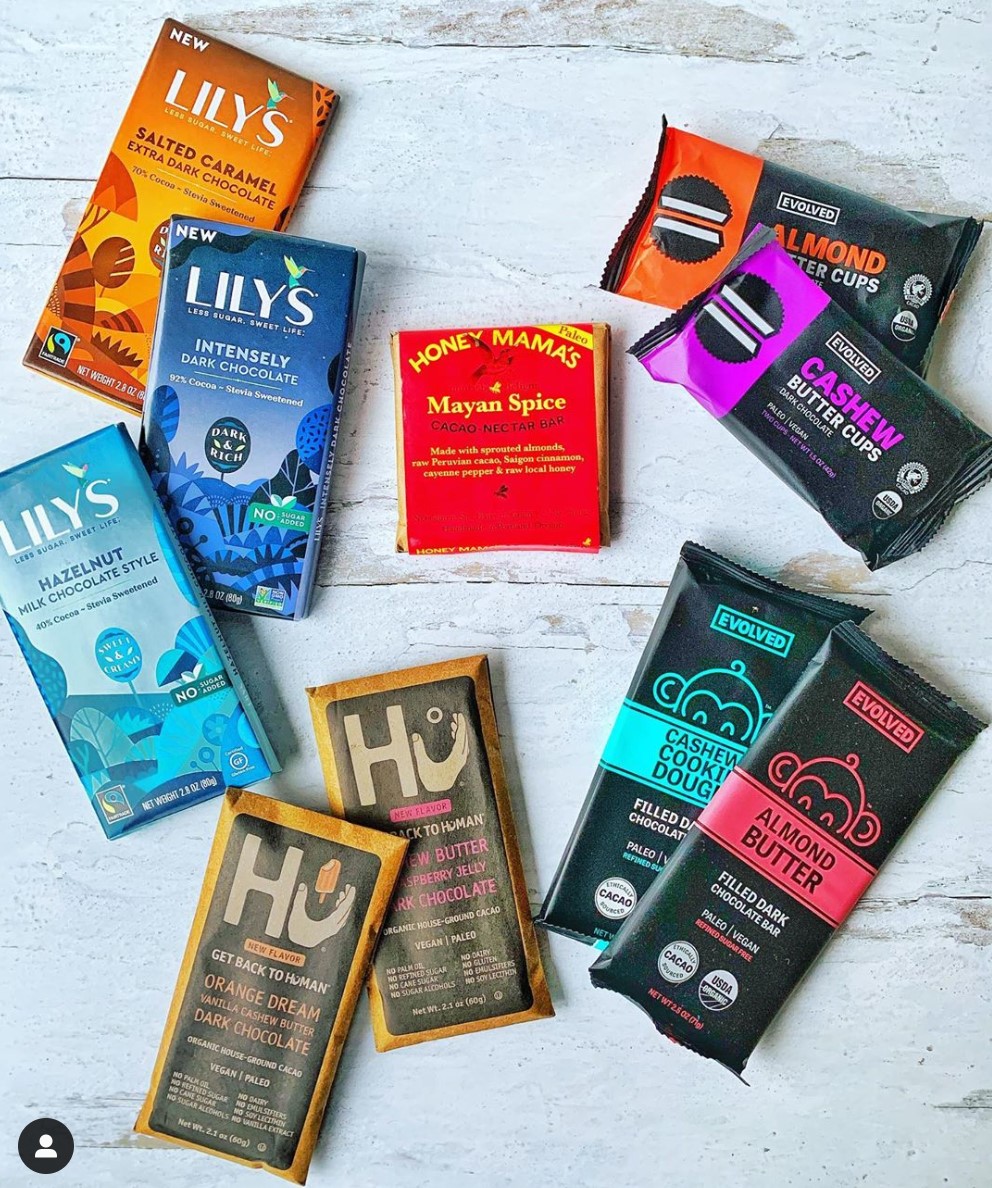 Who would have ever thought that chocolate of all foods would be something you can indulge in and actually become healthier! If I could tell my past self this information now , I would have saved so much energy trying to pretend like I didn’t like the smooth and creamy treat and actually embrace my chocolate sweet tooth with a few pieces of my favorite dark chocolate when those cravings hit!

Chocolate is the guts best friend

Study after study looking at the benefits of dark chocolate on gut health have found that the flavanols in this food are the reason for a happy gut. In one study participants were given a chocolate that contained a high amount of cacao and then a low amount cacao for 4 weeks. What the study found was that the high cacao group saw a significant increase in good bacteria (bifidobacterial and lactobacilli … to learn more about these specifically click here!) in the gut while a specific harmful bacteria (clostridium types) significantly decreased in the participants. Not only did the composition of gut bacteria change but also inflammation markers such as plasma triglycerides and C reactive protein levels decreased while consuming these higher levels of cacao and flavanols.

Another study looked at the benefits of Lycopene on gut health. Lycopene  is a plant compound with antioxidant properties found in foods such as carrots, tomatoes, grapefruit and even dark chocolate it has been shown to help with blood pressure lowering effects as well and prevention of some types of cancers. But this specific study looking at dark chocolate and lycopene found that participants who consumed the lycopene rich dark chocolate had a positive change in their gut bacteria as the amount of good bacteria increased ( Bifidobacterium adolescentis and Bifidobacterium longum as well as Lactobacillus). These types of bacteria are known for their probiotic effects within the gut. This study also noted that the lycopene found in dark chocolate also acted as a prebiotic which helped the probiotic bacteria grow and strengthen in number within the gut.

Another curious finding on dark chocolate and how it contributes to your health is its specific fiber found in the dark chocolate. You might be surprised to know that chocolate has a fairly high amount of naturally containing fiber. About 100g of a dark chocolate bar (75-90% cacao) can contain up to 11g of fiber which is around 45% of your daily requirements of fiber for the day. This fiber found in dark chocolate acts as a prebiotic nutrient that goes undigested until it hits the end of your digestive tract or colon. It is in the colon where these fiber molecules become broken down by the good bacteria  This fiber is broken down into  short-chain fatty acids like butyrate and acetic acid that help to fend off harmful microbes and reinforce the gut barrier against pathogens and invaders.

Dark chocolate is really a remarkable food containing so many unseen benefits to the gut. It is really no surprise why so many people fall in love with this delicacy, it not only tastes delicious smooth and creamy at the first bite but it also packs so many nutritional benefits that the body knows exactly why it’s craving that piece of chocolate.

Dark chocolate usually ranges from 70-100% cacao, while milk chocolate and white chocolate can contain anywhere from 1-50% cacao leaving less of the beneficial cacao and more room for added sugars to sneak into the diet.

How to choose the healthiest Chocolate

Choosing the most beneficial dark chocolate isn’t just about going to the closest grocery or corner store and picking out any bar of chocolate but it’s not rocket science either and you don’t need to live near a fancy organic grocery store to find healthy dark chocolate options.

What you want to look for when on the hunt for a healthy yet satisfying dark chocolate treat is to look for dark chocolate that contains at least 70% or more cacao in the product. The company will either have this right on the front of the chocolate wrapper or it will say the amount on the back near the ingredients list.

Dark chocolate ranges from 70-100% cacao, while milk chocolate and white chocolate can contain anywhere from 1-50% cacao leaving less of the beneficial cacao and more room for added sugars to sneak into the diet. That is why it is important to look for the 70% label as almost all of the studies looking at the dark chocolate benefits have been with chocolate that contains 70% or more cacao.

After you determine that the chocolate you are looking at is indeed dark chocolate, turn it over and look at the ingredients. You want to look for added sugars in the ingredient list and look to see how many grams of sugar are in a serving of the chocolate. This is important because even though dark chocolate contains so many beneficial compounds if it is loaded with sugar this may defeat the purpose of eating chocolate at all.

For a standard comparison a reasonable chocolate bar that is 70% cacao has about 8-10g of sugar per serving. If the chocolate bar has over 15g of sugar I would try to avoid it as you will just be consuming mostly sugar with very little benefit from the cacao.

The higher the cacao the lower the sugar levels will be and the less sweet the chocolate will taste. If you are just starting on this dark chocolate journey try the 70% cacao and work your way up to a higher percentage over time. The more cacao the bitter the chocolate can taste but it’s a personal preference as well. Trust me when I say you can go from only liking the milk chocolate to 100% dark chocolate but it takes time. The first time I tried 100% cacao chocolate I thought it was the nastiest thing around but after a few attempts and adding it to some baked goods I am now hooked and the 70% cacao is almost too sweet! 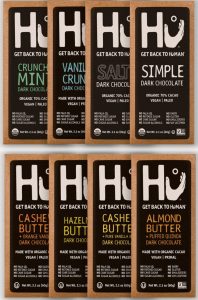 Hu Chocolate: One of my favorite chocolate companies out there on the market currently! All of their products are gluten free, kosher, Non GMO, Organic, vegan, paleo, and low in added sugars. Not too mention all of their chocolate is at least 70% cacao so you don’t have to worry about looking at each and every label to determine if there’s that added benefit from the cacao! They offer everything from chocolate bars to chocolate covered nuts, chocolate chips and even crackers (not chocolate but still delicious!) If you are interested in trying any of their products you can get 15% off their entire website by using the code Holly15 at checkout! I cannot recommend their chocolate covered cashews and vanilla crunch chocolate bars enough!! I am seriously addicted!

Evolved Chocolate: If there is one company that stands out in customer service this is the company! Not only do they create amazing fun chocolate bars (CUSTOMIZED CHOCOLATE BARS!) but they are the most caring and generous company out there! Seriously though what other company calls you personally to tell you that your chocolate has shipped or a hand written birthday card with a discount code!

I have tried every single product that they have had! YES, every single bar, cup, chip, butter and spread they have come out with and not once have I been dissapointed. Well only when they are out of stock but that’s beside the point! They have chocolate ranging anywhere from 72%-100% cacao so you can try them all and see which level of cacao you like the most. They offer chocolate that is vegan, low in sugar, paleo friendly, keto friendly, organic, and customizable! My all time favorite is one of their newest flavors the Cashew Cookie Dough filled bar (heaven!) and their cashew butter cups!  Also if you want to be an insider let me know and I can invite you to be apart of their exclusive Facebook page The Monkey Troop where you can be apart of the most loving and fun chocolate group out there!

Lily’s Chocolate: Another one of my favorite chocolate brands is Lily’s Chocolate. They also have a range of flavors and varying degrees of dark chocolate and milk chocolate. They even have chocolate chips, chocolate peanut butter and almond butter cups and chocolate covered nuts as well. This brand uses stevia to sweeten their products so there is no added sugar in any of their chocolate products which is great for those doing keto or looking for a low sugar chocolate option. They are also gluten free but do contain soy and some contain dairy but there are some that do not so if you are vegan look for the ones without milk! Hint: the dark chocolate ones!

Now tell me, what is your favorite chocolate brand or flavor? I am always looking for more chocolate to try! Did I mention one you already love or is there one I am missing? Let me know! There are so many great chocolate brands out there and want to learn from you too!

Now give dark chocolate the credit it deserves and stock up a small section of your pantry or fridge with a few bars to have on hand at all times!