So I must really love cauliflower because my first and second posts/recipes on my website both feature cauliflower, but if you love cauliflower as much as I do I hope you won’t mind! If you are a big fan ( I mean who isn’t now a days?!) you can check out my Mac n Cheese recipe here featuring cauliflower in all the best ways!

But don’t worry I have a lot more recipes and content that have nothing to do with cauliflower as well so stay tuned for those to come in the very near future. Meanwhile while I consume my weight in cauliflower in bagel and mac n cheese form I feel like I should share something about me you would have never guessed until now.

I used to despise vegetables as a child. My mom was the cook in the family and she believed (or still believes) that vegetables taste bad so she never bought or cooked them while I was growing up. It wasn’t until 8th and 9th grade that I started to get curious about other foods and become more aware of the benefits of eating fruits and vegetables that I started eating cauliflower and a lot of other vegetables and fruits too! I immediately fell in love with trying these new foods and creating new ways to incorporate them into my diet that I began to become more adventurous and experimental in the kitchen. One of those recipes were these cauliflower bagels that I accidentally made one day a while back in the beginning of my health journey but never really thought people would like these because they were a little different.

Then the cauliflower craze hit a few years ago replacing all the high carb flours with a new magic low carb option CAULIFLOWER!  Now if you haven’t been   to the grocery store to find those Trader Joe’s pizza crusts, gnocchi,  and cauliflower rice mixes you may be one of the only few people left that haven’t had them. Now I’ll be honest I haven’t actually tried any of them because I don’t have a Trader Joe’s anywhere near me but I have seen them and know how people get over these hot ticket items and I must say I am pretty jealous of everyone who can get their hands on these specialty foods! I am just a foodie who can’t try all of these foodie loving items, but at least I can live vicariously through everyone else’s Instagram feeds!

Now cauliflower isn’t just a fad because it’s low carb , its one of the most versatile vegetables I have ever cooked with and even though its a white vegetable does not mean it doesn’t have nutritional benefits. I was curious if cauliflower was known to have any specific gut healthy properties as I am a gut health nerd and what I found was interesting! A study done in 2017 studied the bacteria in participants guts when they consumed cauliflower and broccoli (a high cruciferous vegetable intake) and found that even though these foods are high in sulfur containing compounds (that tend to cause gas) it was found that the intake of these vegetables were linked to a reduced amount of sulfur producing bacteria which may be potentially beneficial to gastrointestinal health. A lower amount of sulfur containing bacteria in the intestines may relieve bloating and gas during digestion which can lead to a feeling of less discomfort and irritability after a meal.

Now it depends on the person and how well they can tolerate these vegetables and just what type of bacteria predominately lives in the intestines but knowing that these vegetables actually help to reduce these sulfur producing bacteria is really interesting to me!

So now that you know how beneficial cauliflower is to the gut may I suggest you save 10-20 minutes today and make these ridiculously easy and quick cauliflower bagels!

They are grain free unlike most other bagels and have only a few tablespoons of almond flour and coconut flour to help bind the cauliflower with the eggs in this recipe.

I used Bob’s Red Mill almond flour and coconut flour in this recipe, along with eggs, nutritional yeast and of the course the seasoning of all seasonings the Everything but the Bagel seasoning to take these plain bagels up a whole new level!

You will need a food processor, large mixing bowl,and a spoon to make the bagels so it’s not a very labor intensive recipe to follow, which is one of the main reasons I love and make the bagels so often! After that you just bake them for 20-30 minutes and let them cool for a few more! I highly suggest adding cream cheese to these and maybe a little smoked salmon if you want to get real fancy! That’s what I do when I really want to go all out!

No matter how you enjoy them I hope that you’ll share your creations and let me know how they turned out in the comments below!

These bagels are my BAE gals! 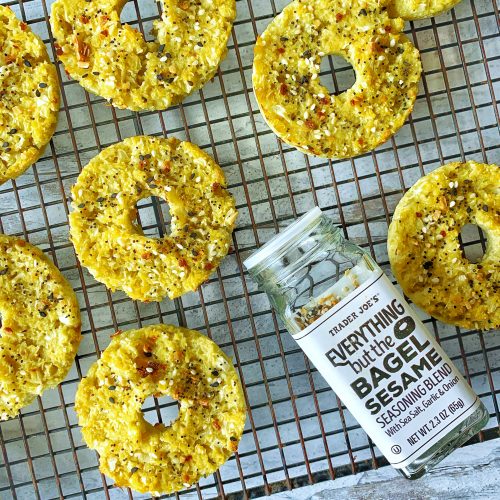